So my wife’s mother was unexpectedly in the ER for two blood transfusions for reasons she hasn’t quite made clear to us. We thought it was a diabetes medicine side effect but now she says no. Anyway we decided to make an unexpected trip north to Illinois to check in and make everyone’s day. We told my wife’s 92 year old grandmother who immediately made a date for us to have a roast. To avoid the hassle, I convinced my wife to tell her mother only when we were halfway through the 2 day drive.

We got to spend some time at my wife’s grandmother’s farmhouse. It was built at the turn of the century as one of the first homes in the area with electricity and updated with new carpet in the 70’s. Her grandmother is a riot. She is a tough old bird who is damed and determined to keep the whole place running if it kills her.  We enjoyed the couple days together had the obligatory midwestern meat and potatoes dinner and pancake, bacon, and eggs breakfast. It amazes me how a meal is meat and refined grains. All else is peripheral .

My wife’s father and I have a slightly awkward relationship. After meeting my wife and I lived with her parents for a few months two separate times during the first two years before we got married. He’s not particularly religious but he is a little traditional. He didn’t want us sharing her room, so we played the charade awhile until her mother, in a proactive move to try to ensure we’d never move away, cornered her husband and let him know we could sleep together.

I never asked him if I could marry his daughter and we asked him to “bless this woman to be married” rather than give. Subtle change of semantics and values. I don’t know if he notices or thinks about it, we don’t talk about it, but my being uncomfortable make me analyze it and wonder.

All this to say he offered to make breakfast before we left. I was inclined to politely refuse but knew he was being nice and we’d eat it so I said that sounded good. Well he pulled some pancakes right out of a magazine like I’ve never seen before. Perfect shape color texture. I was impressed.

On the way back south we pleasantly and accidently found ourselves around some surprisingly harrowing bends in some quite thick forest. Life-long Illinoisans we were surprised to find ourselves in Illinois in such a foreign un-flat land. I quickly surmised we might be in the fabled Shawnee National Forest I’d heard existed north of Cairo. Only now, googling, I learn that I was correct, we were specifically in the Crab Orchard National Wildlife Refuge skirting Devil’s Kitchen Lake. We stopped at the lake for a quick moment to catch the peace of the shying sun. The only thing the picture doesn’t quite capture was the cold. It was cold.

Just south of Memphis we stopped for a burrito. If you’ve never been to the south. You have to go to a chain here. It’d funny how chains have their standards that are tightly followed nationwide ensuring a universally uniform product. Well it doesn’t work in the south. In the south people have values.

Take Subway. Southern value: Sandwiches have meat. Result: You will get a Subway sandwich that has more lunch meat than four Subway sandwiches ordered anywhere else in the country.

Our northern Mississippi Qdoba experience was true to form. Meat like you’ve never seen packed into a burrito with so much cheese and sour cream, it reached the point I couldn’t quite enjoy it. Anyway I think the pictures and the phenomena are worth appreciating, if only to chuckle the subtle undermining of corporate efforts at homogenizing America.

We stopped again outside of Jackson, Mississippi with my baby just about pooped. We managed to rally for Barnes and Noble, got a fresh salad, and finished the drive back home that night through Port Gibson and Natchez, Mississippi.

Seem to be places we definitely will have to take a weekend to explore. Port Gibson was sketchy at night but going through it during the day, on the way up, was beautiful. During the Civil War, Grant said it was too beautiful to burn. Another day, another adventure, another beautiful, interesting place. The hard part is waiting. 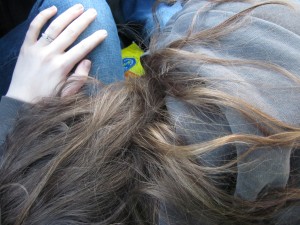