So, if Taco Sisters is one thing it is fresh and it is good. And it is aesthetic. The mixed baby lettuce and greens. The house smoked gulf tuna. The cheese in the salad. The tomatoes and apple. It was all refreshing. Flaky, subtle, tasty. The tin roof stand, the bright paint, the beautifully flowered picnic area, the big bright shade umbrellas. All almost too much simple beauty to take in. Taco Sisters brings a California ethic to food. The ingredients are simple and, importantly, you feel good after eating them. 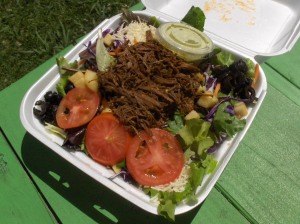 A couple weeks ago, and I was hoping to bribe my wife into going out to Lafayette so I said we’d make it out there for the taco stand she’d been talking about. She bit the hook and I reeled us out just in time for her to get the last garden salad of the day. Though not typical, she rightfully didn’t pass up the chipotle-adobo shredded brisket salad.  The shredded brisket had a good bite to it, yet was understated and simple. The rest of the salad combined a rich, sharp cheese, tomatoes, apples, greens, and homemade dressing. Beautiful raw contrast to the monotony of serially cooked meals.

Fresh smoked pico de gallo is made up daily, though out on our visit. I had the home smoked gulf yellow tuna taco. Again, fresh, flaky, and tasty. I only regret it wasn’t double the size. I could have easily enjoyed a big ole taco. As it is, I’d have to say go with the salads where you get the beauty of the meat with the quantity of the salad for close to the same price. 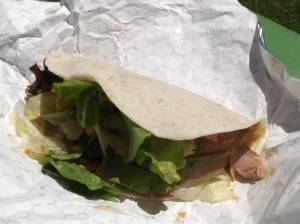 Now for my story of contempt, that explains why it took me so long to make my way out to Taco Sisters after being told about it for so long by a reliable yet often dismissed source:

My wife has been mentioning for over two years that she’d heard of this taco stand in Lafayette that she thought would maybe be really good. That’s code for saying she knew I’d love it. I often forget to decode what she says. I listen to her exact words said softly. I didn’t listen too much. I imagined her innocence in believing in a magical taco stand out in Lafayette.

I, being from near the Hispanic mecca of Waukegan, Illinois with some of the best Mexican food in the country, was contemptuous for a long time of my wife’s appreciation of american style tacos. I could’t really imagine finding noteworthy tacos out at a little stand in Lafayette. So I didn’t exert myself to get out there and I regret it. Once again, I learned to give my wife more credit and to have a little humility. The same lesson, no doubt, I will have to relearn many more times.