So here we are a few months into our Illinois adventure. Three days after we moved here I killed my fish, the pretty big ones I’d been chronicling since January. I thought I’d researched the water conditions we’d face here well-enough, but I did not. And I have the empty tank to prove it.

They made the drive fine in five gallon buckets with aerators. I slowly added the new water so they would get acclimated and then plopped them in the tank.

Now the water comes out of the faucets out here at the hundred year old farm house with an unbelievable amount of fine bubbles that can take a while to dissipate. My fish swam and then immediately went horizontal up to the top, where they laid floating on their sides. I thought I’d killed them, but within an hour they came-to.

Two days later, it was time to change the water. I drained the old out and filled it back up. The fish seemed happy they schooled in circles, playing in the current of incoming water. But then suddenly stopped and floated to the top–like before.

I blamed the first time on the travel and change it water. Well, it was the change in water alright and it killed all of them. I was stupid and now sad ta boot. 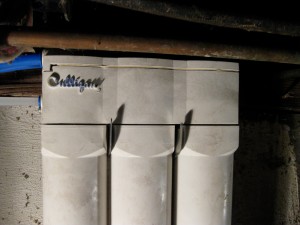 So, some research let me to believe the dissolved bubbles could have been carbon dioxide and could have killed the fish. Otherwise, the salt from the softener and iron not removed by the softener could have done it. For repentance I decided to install a reverse osmosis [r.o.] system. Perhaps the good coming out of the terrible end these guys met would be clean water for my wife, me and our future fish. Now all I had to do was set it up.

After brain storming with my father and a family friend who happens to work for Culligan we thought the brine storage tank for a water softener would be the perfect size to hold 50 gallons of water. It even has a float to automatically shut-off incoming water when it fills up. 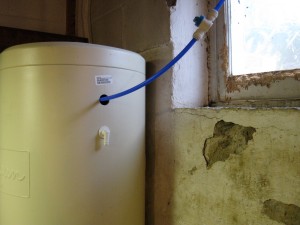 I picked up a Culligan r.o. system and storage tank on craigslist. To me it’s important to get a good r.o system. Reverse osmosis is an inefficient process. The particular system can make it more or less so. Cheap systems are incredibly inefficient and can waste three to seven gallons of water for every one gallon of water that comes out purified. This system throws away about two gallons for gallon produced. The waste water is still pretty clean and can be used for watering plants or washing clothes but I don’t have anything currently in place to harness this water for good. Future project. 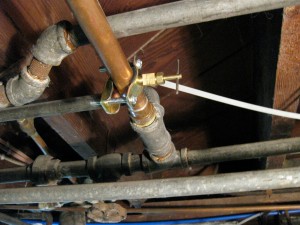 I mounted the filter on the wall. Attached the blue tubing from the system to the storage tank and to the faucet for us to drink from. Attached the drain line from the system to drain the waste water. All I had left was to tap the cold water line to supply the system with water to purify. It’s important to tap a water line after it comes from the water softener. Had I sent our hard, hard water through the r.o. unit, I’d be replacing the filter cartridges every month.

I tapped the cold water line next to the feed to the automatic ice cube maker. I used the same style piercing valve as the one for the ice cube maker and it worked like a charm. It made the hole, I attached the tube, and we were in business. I let the system run overnight into the drain, as the directions recommend, to flush the carbon particles out and then let it start filling up the reservoir. 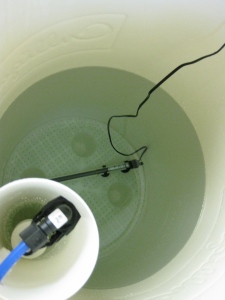 It takes about two days for me to get 50 gallons, which is a little longer than it’s supposed to but will work for my one tank. I threw a 300 watt fish tank heater in the bottom. With my r.o. redemption complete, I’m ready to think fish again.

I’ve been obsessing over what type of discus I’m going to replace mine with but don’t know. My wife has been a saint dealing with me and being the voice of reason. She suggests waiting for ones I really want and not rushing out to get some nice discus only to regret it a few months later when my dream discus become available.

Like always, she has a good point and I’m almost able to wait. Right now I’m leaning toward Piwowarski discus and maybe a couple of incredible wild discus sustainably imported from Brazil.

9 thoughts on “My Discus Fish Massacre and Reverse Osmosis Repentance”