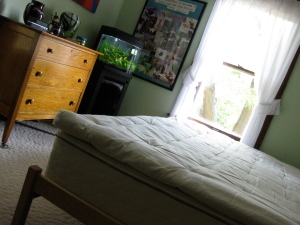 So we did it. Everything came together amazingly. The day after we got home from trying out our first natural latex mattress in the store, we did a nationwide craigslist google and found one for sale two and a half hours from home. It was quite serendipitous. Usually there are only a couple for sale at any given time across the whole United States, so it was awesome to find one so close to home.

It had been listed for a month. We sent out the email on Sunday, got a reply later that day, and agreed to make the drive back up to a half-hour past Madison to pick it up the next day.

The lady we bought it from was particular. A stage ahead of my wife and I in life, she had two young children. She seemed to be in her early to mid thirties. She told us over the phone she was selling the mattress because had been looking for a new set of night stands to go in her bedroom and ended up buying a complete bedroom set that included a new king mattress.

She said she hadn’t been to impressed with her latex mattress. Her major complaints were that it was an inch too wide for the cover which made it bulge at the edges and that she wanted it to be firmer. After buying this king Savvy Rest, she’d gotten a natural latex twin Flobed for her son. She highly recommended buying from Flobed saying that the design of the mattress was seamless and that the company would do anything to make their customers happy. We definitely took note for the future but were happy to buy her Savvy Rest to do a little less damage on our savings. 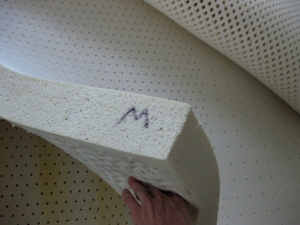 Since we’d never slept on a latex mattress, we also hated to spend too much money in case we didn’t like it. Seeing as latex mattresses last decades and resist dust mites, we didn’t mind buying a used one from a meticulous person.

We lucked out again because the firmness levels were the exact same configuration we determined to satisfy us the most at the store the day before. It had firm and medium dunlop topped by a three inch layer of soft talalay. Too crazy lucky. By waiting a day and striking an incredible vein of luck our natural latex mattress set us back $780, counting the gas it cost to go get it, opposed to the $2500 it would have cost for a new queen. We were pleased. 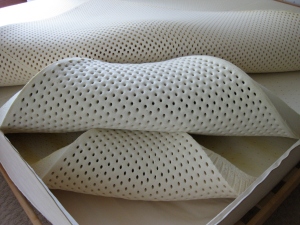 Online, a lot of people mention the sweet-latex smell that natural latex mattresses give off can be quite bothersome. Unfortunately, I have to agree. Three and a half hours in the car with the latex made me nauseous. Now that the bed’s been together for a couple of weeks, the smell seems to be a little more subdued but still ever-present. The smell is definitely one ironic downside to going natural.

The first week we had it home, we had to have it on the floor. We lacked a proper platform bed. I prowled craigslist again. I didn’t have too much hope and came close to just buying a simple wood platform bed from Bedworks of Maine. I couldn’t quite justify the $699.95 for such a simple bed, especially when I wasn’t crazy about the look. The fact that it was going to take a few weeks to get the bed from them, gave me the necessary faith to find one quicker and cheaper on craigslist.

Four days later, bingo! I found one in Milwaukee. My baby and I hit the road and headed east. We picked up an interlocking platform bed frame for $300, including the gas and Mexican food it took to pick it up. It’s got a pretty neat design. It doesn’t require any tools to put together and is pretty solid. 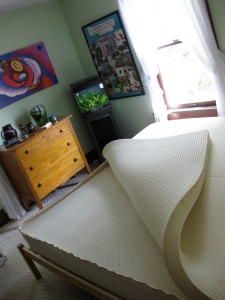 We put the cotton/wool shell on the platform frame and added our latex layers. We waffled each layer into place as shown on the Savvy Rest website and low and behold they fit perfect. They definitely need to be waffled into place. It seems to compress the latex into place over the whole surface area of the bed. If you don’t waffle the layers, you end up trying to push in the sides, forcing the edges to bulge. Add the top of the shell, zip it up all around and you have yourself a diy mattress. 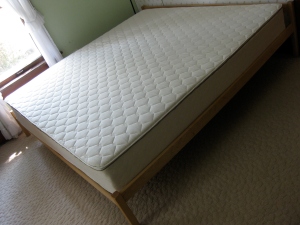 When we woke up each morning for the first week, we felt like someone had snuck in our room and beat us all over. Every last muscle in our backs and legs were sore. My back, however, didn’t hurt like it did with the old mattress, which was a plus. But we sure were sore. I think the latex supports the body differently, so our bodies had to do some muscle rearranging. It got better and we were sleeping pretty good, but needed a softer top to the mattress. I don’t know how it wasn’t firm enough for the lady we bought it from but it sure is firm to us. 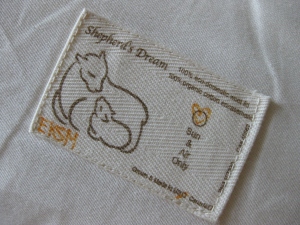 It was back to craigslist, for a wool topper. We tried a wool mattress topper at the store when we tried out the latex mattress, and thought it felt damn good. I found a very nice one a guy was selling along with his wool comforter out in Portland. I shot him and email and then called and asked him if he could ship it to me in Illinois if I paid him in advance via Paypal. He said he didn’t see why not if I didn’t mind the cost of shipping. 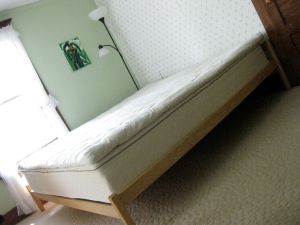 He’d had it less than a year and was moving back to Florida where he was from and said he wouldn’t be needing them there. He didn’t have any pets, so it seemed like a go for us. A week later, we got our new wool topper in the mail.

We got it on the bed and my wife laid sprawled out in bliss. The wool really does feel nice. New that sucker is $830 and the wool comforter is $420. We got both for $515. Definitely not cheap, but we figured we were still under budget. 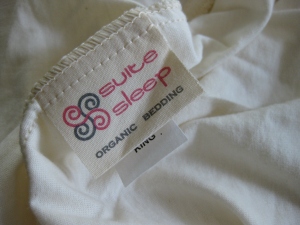 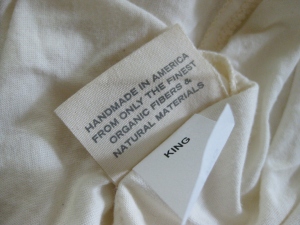 We added a thick Suite Sleep organic cotton mattress protector to cover the wool topper and latex mattress below. It and some simple white sheets were the only things we bought new. I’m surprised we bought it, seeing as it was $190, but thought it’d be our mental insurance guarding the money already spent. 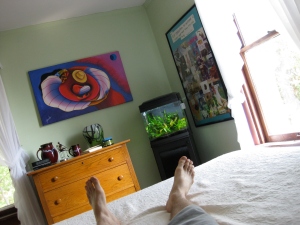 So that’s it. We have our natural latex bed and wool topper that’d been in the mental works since Young House Love put the idea in our heads back in ’09. So far so good. We like it, it’s different, but we’ll see how it goes over time. Here’s to a good night’s rest, no matter the mattress.